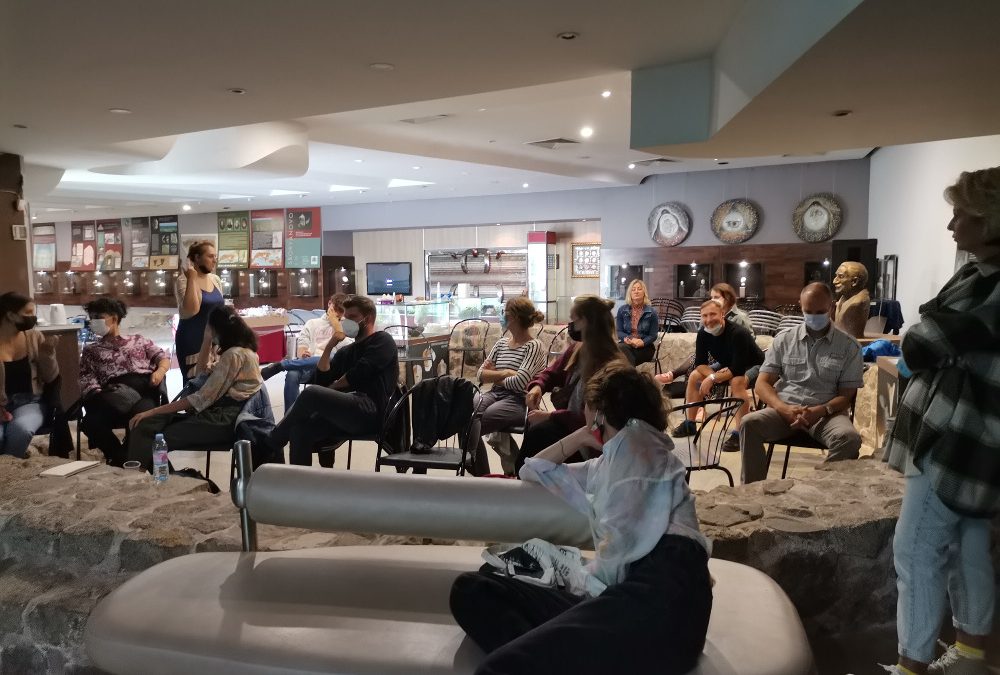 Our trip to Plovdiv began with a supposed disappointment. As we sat on the bus from Sofia to Plovdiv, news reached us that the planned trip to the prison where we were to see a performance would be cancelled. Some of the performers had tested positive for Covid19.
But how greatly disappointed can you be when you’re on the aforementioned bus with esteemed colleagues, driving through an uplifting Bulgarian landscape? The fact that one drives through Bulgaria at all is already worth a lot.
And this worth developed into full splendour in the further course of the journey. Apart from tourist pleasures and completely overcoming one’s own resentments about using communal bathrooms, the main focus was on meeting other European groups. Groups that, like aufBruch, are dedicated to theatre work with prisoners.
The first meeting took place in a museum. The room there is used by the Bulgarian organisation Upsda for presentations, and at the same time there is an excavation of an old Roman house from the middle of the 3rd century AD to see.
After a round of introductions, the staff of Upsda reported on their theatre work in the prison of Plovdiv and in the open prison outside the city. Concerning the current production, the problems that were revealed due to the pandemic situation were named. The main part of the rehearsals took place online and the director was repeatedly summoned to the prison in a Kafkaesque bureaucratic process, only to be refused entry. 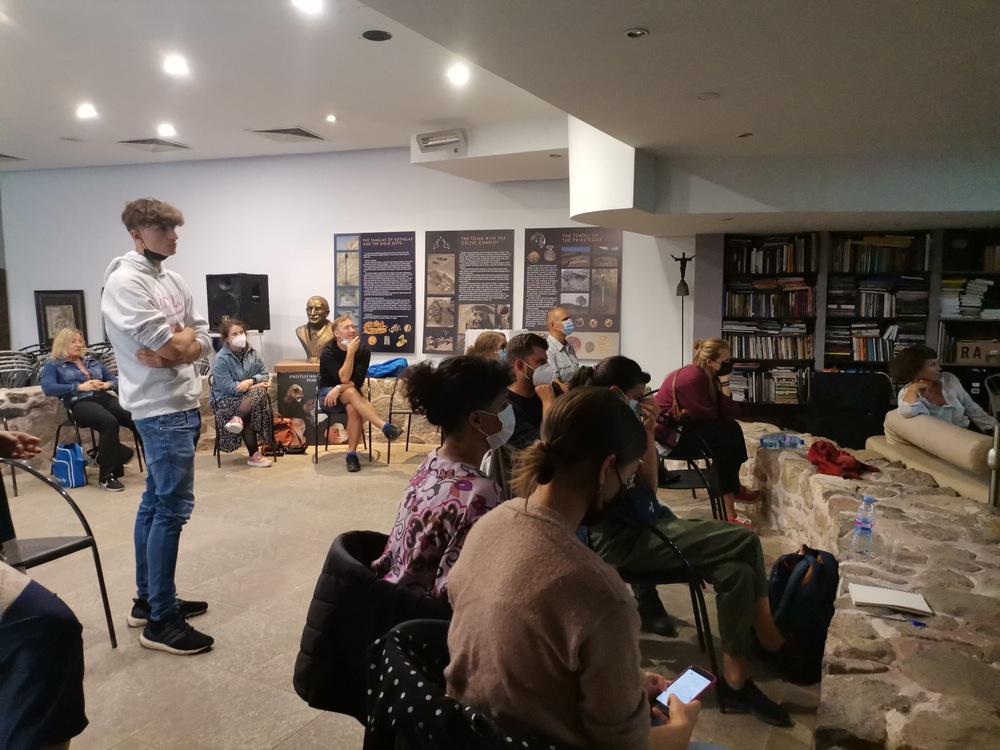 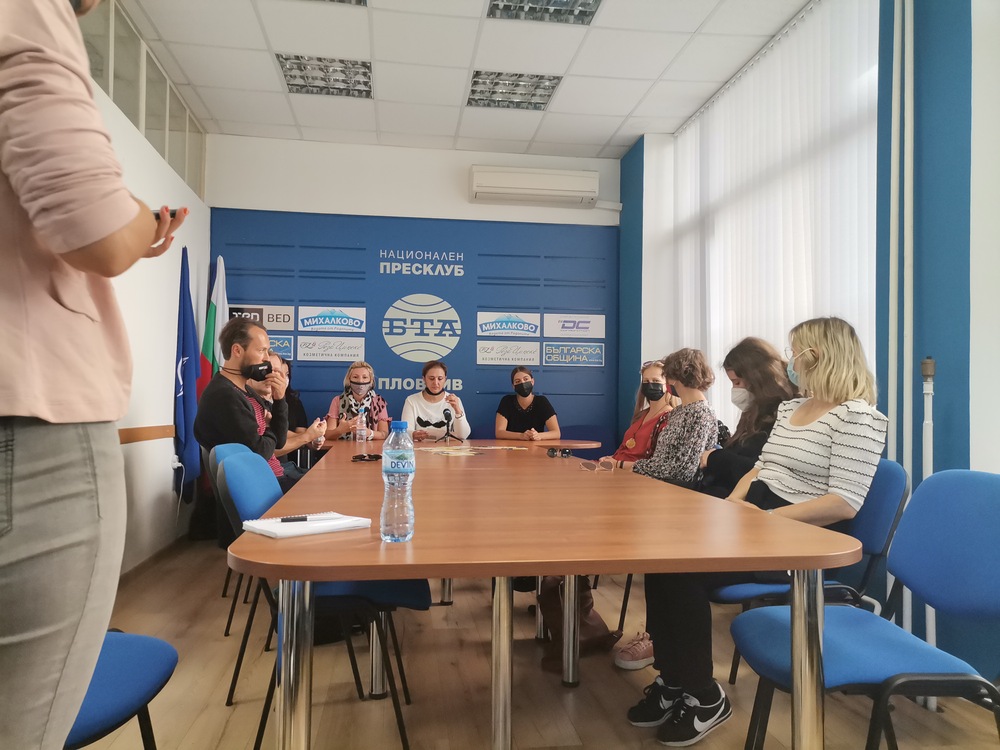 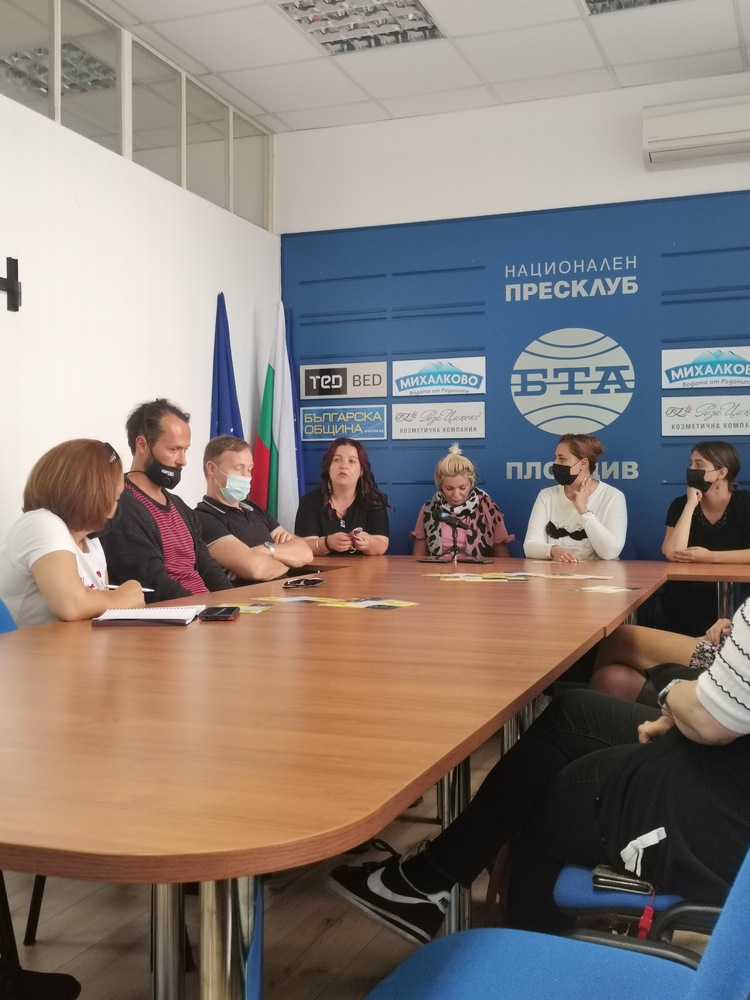 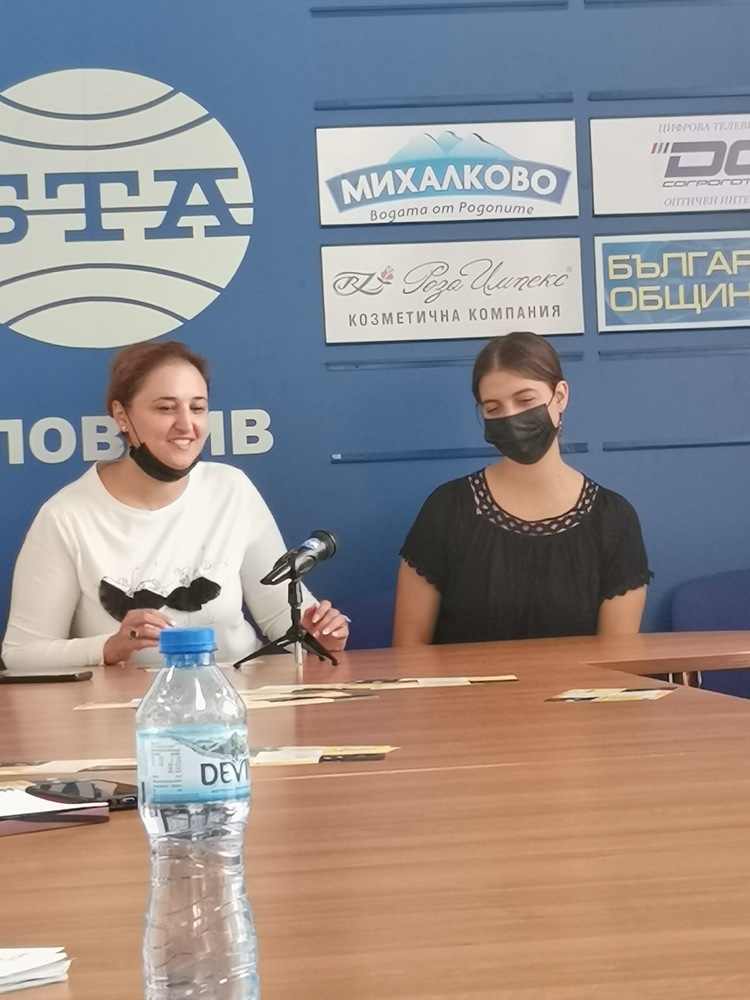 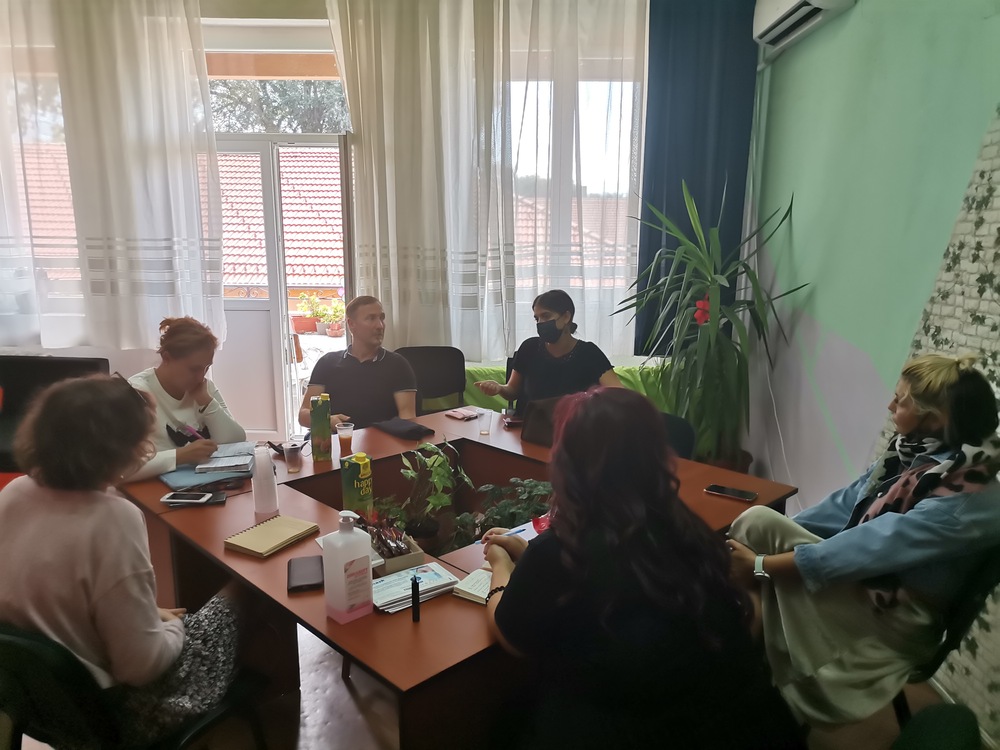 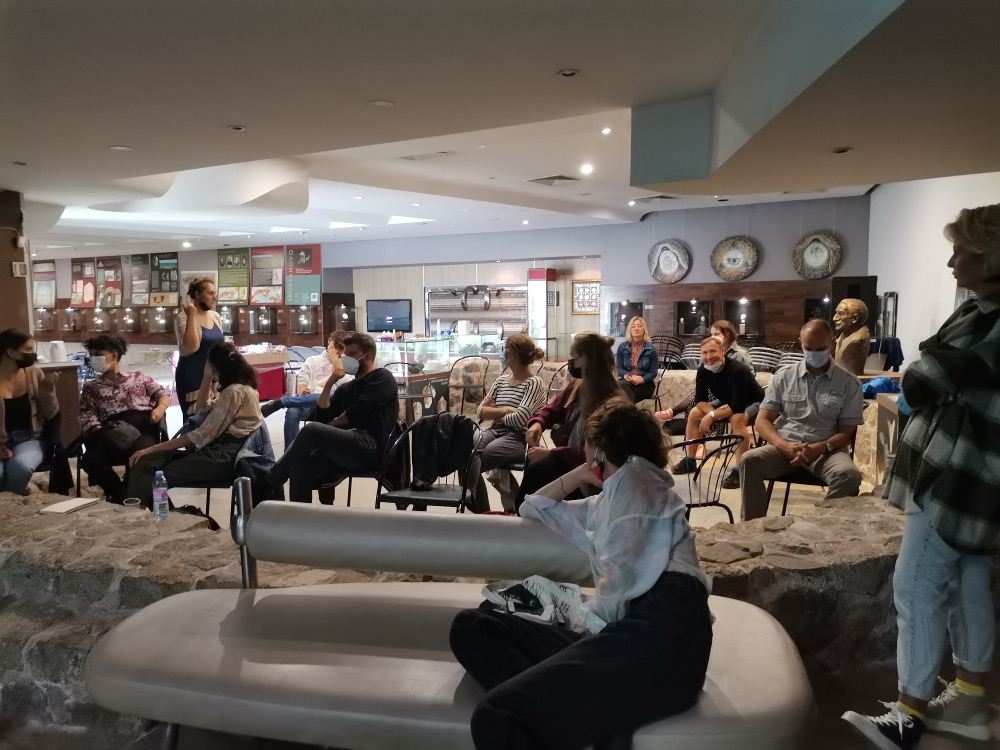 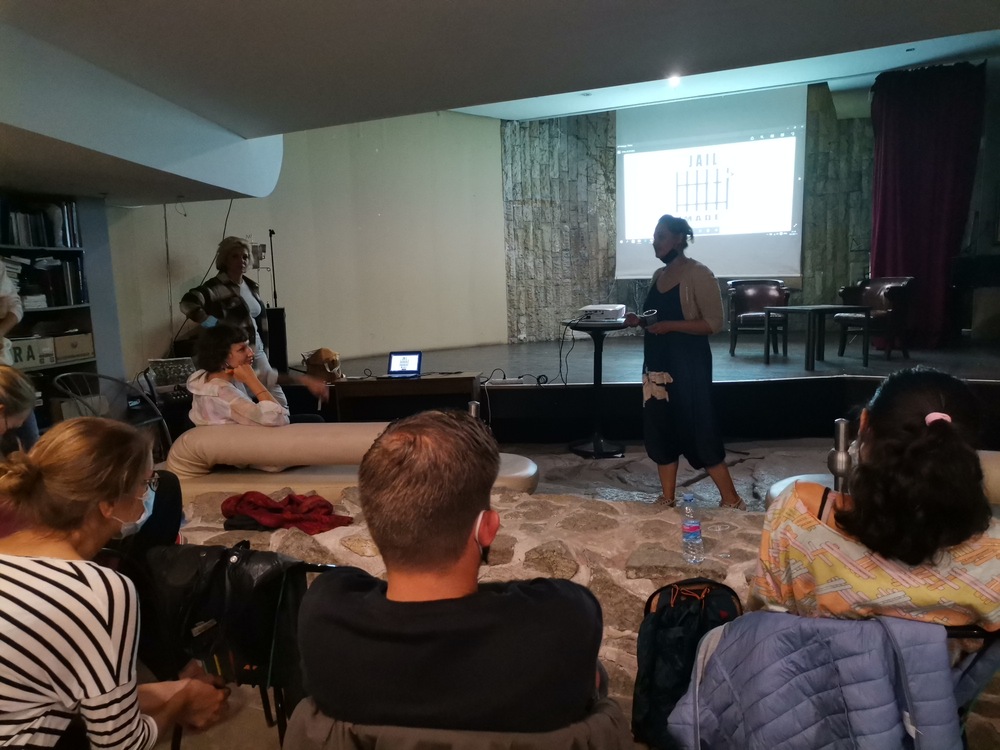 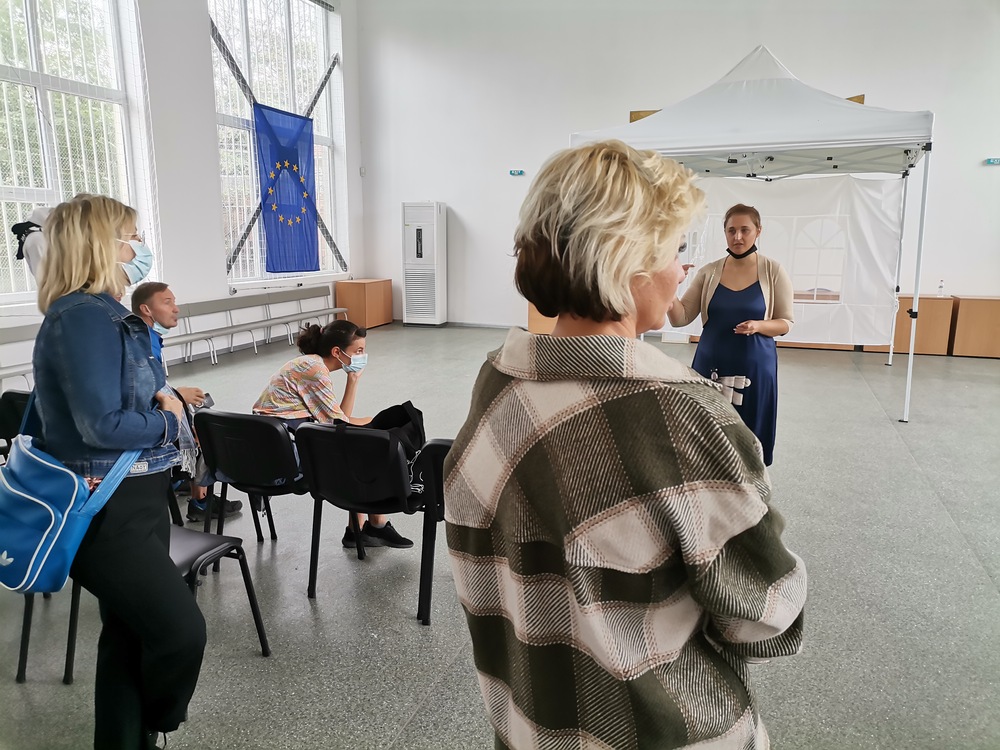 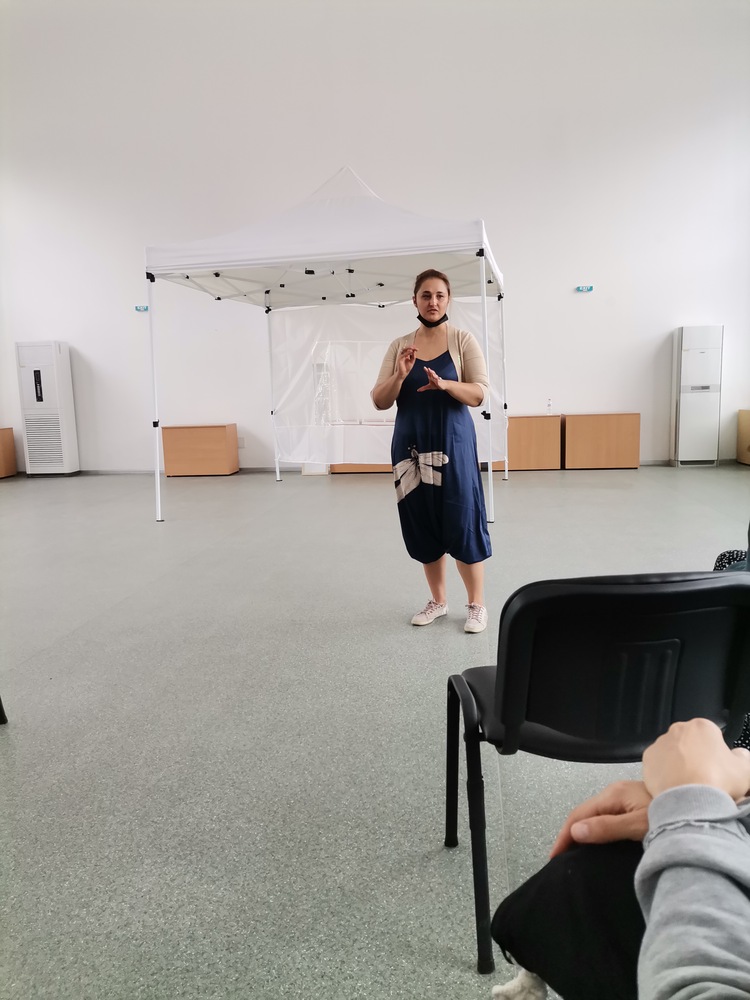 In the end, there were very few face-to-face rehearsals and a major task then was to gain the trust of the men in the shortest possible time.
Their own scenes were developed along the lines of Forum Theatre. This is a method of interactive theatre developed in the 50s and 60s by the Brazilian Augusto Boal.
We saw a short excerpt of the work filmed under improvised conditions. The scene we saw showed a family party escalating. During the performance in the prison, the audience was asked to make suggestions for a different course of action, asking which character should change their behaviour. As a long-time viewer of theatre productions by aufBruch in prison, a familiar feeling immediately set in when watching the play. Although I did not understand the language and the form was different, I felt many similarities in the theatre work.
These commonalities also became clear during the exchange with the organisers from Poland and Italy. Although the possibilities and conditions are different in each country, all of them focus on dealing with the performers at eye level. In Bulgaria, in my opinion, the focus is somewhat more on the socio-cultural character, while in Italy and Germany the artistic orientation is dominant.
Upsda not only works in the prison, but also in Stolipinovo, among other places, a district of Plovdiv known as the Roma ghetto. About 45,000 people live here under partly catastrophic conditions. The Bulgarian organisation works with children there. In a leisure centre belonging to a primary school, we were told about the work on site. Theatre also takes place here, the last production with the children was a self-written version of “Romeo and Juliet”.
After the visit to the leisure centre, we wanted to walk around a bit more, but as it was raining, we were a bit lost on the street between the stalls. Immediately a man approached us and wanted to know who of us spoke German. It turned out that he works in Switzerland and southern Germany and was visiting home.
Even though we were only in Stolipinowo for a short time, I am really grateful to have had the chance. Besides the ancient excavations, the beautiful old town and the hip Kapana district, everything that is not beautiful and pleasing also belongs to a city. And so I can say that I got to know Plovdiv in a real way, as far as it is possible in a short time.
I take a lot for my heart and soul with me from the trip. During the first meeting with the other groups, I was briefly touched by how many committed people are trying to make a difference with their work, and in the case of Upsda, partly on a voluntary basis. Unfortunately, the world is still a dark place.
I also really liked Bulgaria as a country and would like to go there again. And last but not least, I ate one of the best falafel sandwiches of my life in Plovdiv. Near the bus station.

We use cookies on our website to give you the most relevant experience by remembering your preferences and repeat visits. By clicking “Accept”, you consent to the use of ALL the cookies.
Do not sell my personal information.
Cookie settingsACCEPT
Manage consent

This website uses cookies to improve your experience while you navigate through the website. Out of these, the cookies that are categorized as necessary are stored on your browser as they are essential for the working of basic functionalities of the website. We also use third-party cookies that help us analyze and understand how you use this website. These cookies will be stored in your browser only with your consent. You also have the option to opt-out of these cookies. But opting out of some of these cookies may affect your browsing experience.
Necessary Always Enabled

Any cookies that may not be particularly necessary for the website to function and is used specifically to collect user personal data via analytics, ads, other embedded contents are termed as non-necessary cookies. It is mandatory to procure user consent prior to running these cookies on your website.